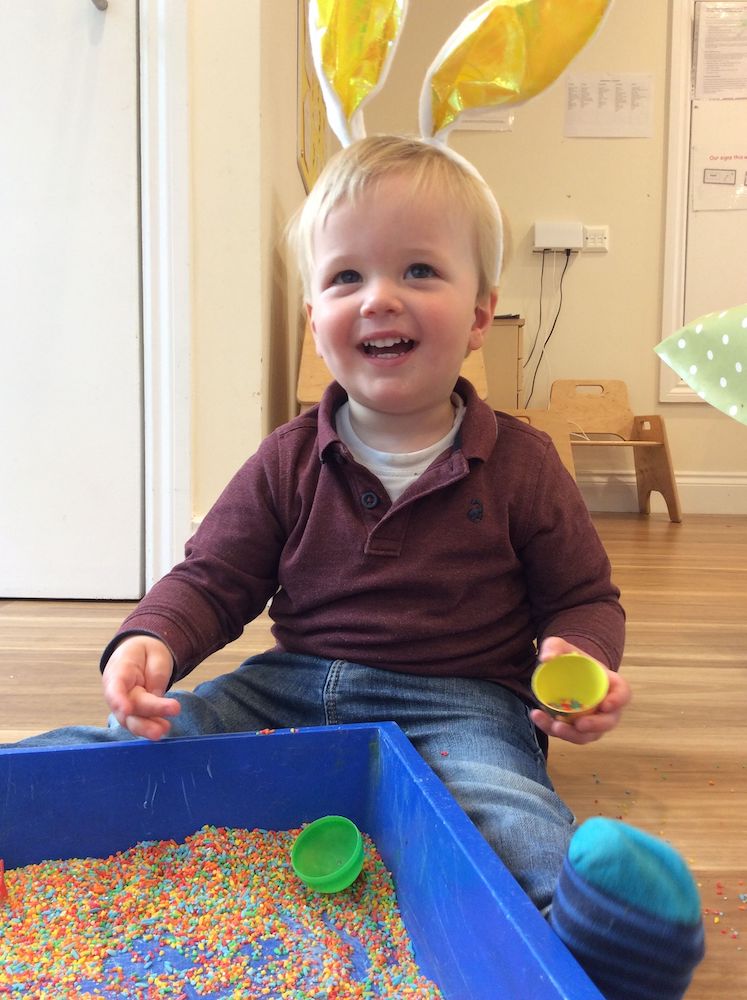 This week at Coombe Dingle, Nursery have been getting stuck into some squishy spaghetti play! There were different bugs hidden in the tray, and the babies used their hands to move the pasta around to find it. They then explored throwing the spaghetti up into the air and watching it go everywhere!

Easter is on it's way and babies have been exploring some themed sensory trays! Some children developed their fine motor skills with some colourful rice and empty egg shells - trying out scooping and pouring with the shells, and moving the rice with their hands! They also reached out and picked up the little chicks and bunnies too.

Nursery have also been down to visit the Red Bus Library this week! Some children read through books with the adults, whilst some chose to turn the pages and look at the illustrations independently. They also had a go at using the interactive screen, pressing objects with the stylus pen to see what would happen!

This week Kindergarten have loved spending time in the outdoor sandpit! They used rakes and spades to dig into the sand, and buckets to build up towers. Some children used the toy vehicles across the surface, role playing!

In the art studio the children have been exploring mark making with a variety of unconventional tools! Some children used a potato masher as a stamp, noticing it leaves an egg shape on the paper. Some children explored cotton reels and string, dipping them into paint and observing the different patterns and shapes they left.

Kindergarten have also been exploring the physical resources in the top garden! They tried out all the different ways to climb to the top of the slide - the climbing wall, the steps, the balance beams - then took turns to slide back down to the bottom!

It's been a local themed week in Pre-School! Each day the children have been taking part in activities related to something special to Bristol. Some children looked at pictures of the Suspension Bridge, and tried making their own bridge from the construction blocks and wooden planks.

They talked about the harbourside and SS Great Britain, and in the art studio made their own boats out of sponges and scrap fabric! They then added them to the water tray to see if they would float. And outside in the garden some children created their own street art, using a variety of materials to express themselves creatively!

Elsewhere in Pre-School children have been getting stuck into a variety of mathematics games. They really enjoyed a balancing game, picking up different numbers and adding them to the scales. They talked about how to make the scales even, and what adding and removing the numbers does!